Four Common Garden Weeds That Can Threaten Your Artificial Lawn

Although the process of how to lay artificial grass on soil is straightforward enough, sometimes, nature has its own ideas! Our artificial grass installers are experts in what they do, but while synthetic turf will cut down on a lot of your garden maintenance time, it doesn't always prevent the appearance of weeds growing through your freshly-installed artificial lawn.

Keep a careful eye out in your garden for the following four weeds that can sometimes find a home even amidst artificial grass. 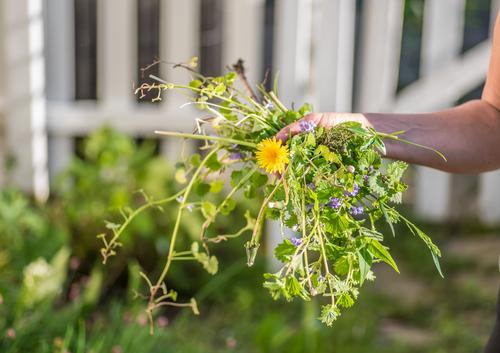 While it may be a plant that evokes pleasant childhood memories, most gardeners regard the common white daisy as a persistent and irritating weed. Daisies can spread rapidly, with seeds that spread through the air and on creatures like insects and birds. They can generate up to 125 seeds per flower head and 1,300 seeds per plant. If they do get onto your artificial lawn, daisies can be especially difficult to remove since they sprout and spread on underground runner shoots known as rhizomes.

The damage they have on grasses, outcompeting them and causing them to die, is obviously not an issue in the case of artificial lawns. However, what can be an issue is the daisy’s ability to spread far and wide, reach flowerbeds, and outcompete cultivated plants for vital nutrients, sunlight, and water.

Similar to the daisy, the dandelion is a widespread weed that has a very well known seed dispersal system. If you thought the daisy’s seed levels were impressive, the dandelion is possibly astonishing. Not only is it capable of producing up to 400 seeds per head, and a total of 12,000 seeds in a single plant's lifetime, a single seed has also been recorded to travel up to half a kilometre from its parent plant and still survive and regrow.

Like the daisy, if left unchecked the broad leaves at the dandelion's base will choke out other plants, and while this doesn’t matter on artificial grass, once again, it will matter if the dandelion makes its way towards your flowerbeds.

Also known as ‘Greater Plantain’ or ‘Rat-Tail’, this plant is a hardy species that can survive through some of the harshest winters, as well as the most severe droughts. While daisies and dandelions might ruin the look of your artificial lawn with their distinctively coloured heads, common plantain will do so with its enormous leaves.

Much larger than any weed we have covered in this list so far, common plantain is also aggressive in its reproduction, with a single plant able to produce up to 14,000 seeds in a single year.

You may be familiar with the saying that dock leaves contain some kind of antidote that counteracts the effect of the toxin in stinging nettles, but sadly, this common plant is little more than a large-leaved garden pest.

Not only can a single dock produce 60,000 ripe seeds per year, but they can also lie ungerminated for up to five decades. Growing up to 1.3 metres in size, this is one weed that you certainly won't want to find growing in the middle of your newly-installed artificial lawn!

While installing artificial grass may help to reduce the growth of weeds, it will not completely eliminate the possibility of weeds growing through the surface. However, if the thought of removing unwanted weeds from your new lawn fills you with dread, simply install our Geotextile Weed Membrane before laying the artificial turf. Specially designed to prevent weed growth and promote effective drainage, this membrane is the perfect solution to your garden woes.

Shop online with the Artificial Lawn Company today or get in touch with us for more information on our products or our artificial grass installation service.